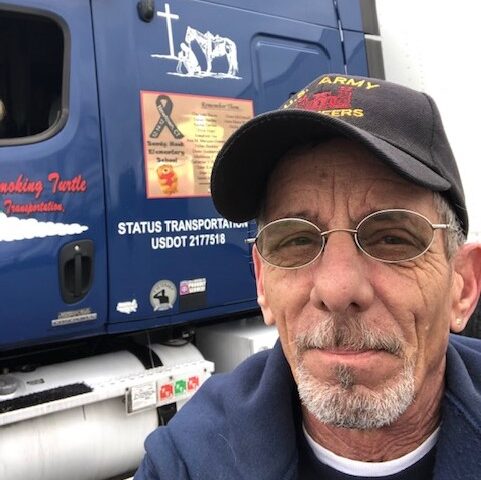 Mr. Larabee has been an Owner Operator with Status Transportation since 2016 and has an enthusiastic attitude that serves him well in enjoying his trucking career.

We continue to cover the careers of Owner Operators and what led them to starting a trucking career. Learning from their experiences, other drivers can see how the trucking industry can lead to a fulfilling life as an Owner Operator. Above all, professional truck drivers like William Larabee are the people who keep America’s commercial and industrial machine moving towards progress—with every single load they deliver. 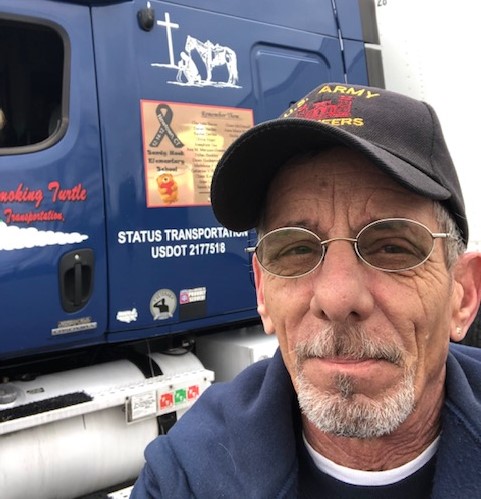 ST: What made you decide to come to the trucking industry?
William: Simply put—it was the economy in 2010 that led me to starting a trucking career. I was doing construction for a while until the economy went upside down. I then went to the unemployment office in the state of New Hampshire to get some benefits for myself, my wife and child. They refused to give me benefits, however, they did tell me they would help me with a job. The clerk told me to choose what I wanted to do and I chose to be a truck driver since I had a CDL before, in the early 70s. The state of New Hampshire covered all of my expenses and gave me $5,500 to pay for my CDL, training, and truck driving school. The training duration was 4 weeks, full-time. As soon as I was done with the training, I already had a job lined up to work with Prime. They took me in immediately right out of school. Once there, I trained with a driver trainer for 6 months and had to train for 40,000 miles before I could be on my own. When I finished my training, I purchased my truck from Prime, a 2010 Freightliner. I bought it new and paid it off in 5 years. I stayed with them from March 2010 until November 2015. Then I started working with Status Transportation as an Owner Operator in 2016 and I have been here ever since. I love working at Status!

ST: What did you do before that?
William: I was in the Military until 1979. Then I went into the grocery industry for 23 years, working retail as a salesman in Connecticut. After that, I was in construction for 5 years, and finally, I decided to become a truck driver by starting a trucking career. I’ve been in the trucking industry since 2010, majority of that time as an Owner Operator.

ST: What is the most important thing that leads to success in this industry?
William: The most important thing that leads to success is to keep the wheels turning. Make sure you are getting loads out and delivered on time. Stay ahead and watch your finances as breakdowns are to be expected. Always put money aside in savings for any breakdowns and issues with your truck. Be prepared for the unexpected at any given time and always remember the saying: “Gotta spend money to make money.”

ST: What was your first driving job?
William: My first driving job was with Prime Inc., located in Springfield, MI. I worked there from March 2010 to November 2015, and then came to Status Transportation in 2016.

ST: How long did it take for you to be comfortable on the road when you first started?
William: I am never too comfortable out on the road. You always have to expect the unexpected. Yes, driving is not difficult, but you never fully get comfortable. I believe that it is when you get overly comfortable that you end up making mistakes and get into accidents. If you’re too comfortable you may lose your sharpness in dangerous situations, like bad weather conditions, other drivers not sharing the road or considering the truckers’ right of way. You have to always be on the lookout and attentive.

ST: How did you decide to buy your own truck and become an Owner Operator?
William: I was able to lease to own a truck from Prime, since the payments were affordable. Within the 5 years that I worked there I paid it off, making my last payment back in 2015. So, as an Owner Operator, I have only had one truck, a 2010 Freightliner, which I still currently have.

ST: What advice would you give to someone who wants to become an Owner Operator for the first time?
William: Some advice I would give a new Owner Operator would be to plan on being out on the road for a while and make as much money as you can when you’re starting out. Keep in mind that you’re starting a trucking career from scratch with no money, so you want to save up. Stay out as long as you can till you have a financial cushion. Have at least $1,000 weekly set aside to start off. You also have to know that fuel is the biggest expense. Watch your bills and your expenses and keep track. But the main thing is to make sure you have money put aside for maintenance on your truck.

ST: Any tips or tricks that new drivers should know?
William: Some tips I would tell a new driver is to learn from your mistakes and keep an open mind when starting a trucking career. When being sent into certain states, especially if you are unsure about the location, keep in mind that it might be worth it. Some drivers don’t want to go to certain states, thinking they are being taken advantage of. As an Owner Operator, sometimes you just have to step up and make money from that unwanted delivery, since it might end up being a great run and worth the money.

ST: What was the most memorable experience on the road that you remember?
William: Every single one of my trips being out on the road is memorable. I love traveling, being in different states and experiencing them. I really liked running in and out of Canada, the cars were friendly, the people were friendly and it was just a good experience. I also love meeting other drivers out on the road and getting to know them. I am very happy with Status so when I meet with other Owner Operators, everyone has positive things to say about them and everyone is on the same boat. Status is a reputable trucking company, offering an awesome experience and I am very happy to be a part of this team!

ST: How long do you stay out on the road at a time?
William: I was spending five, six, seven even twelve weeks out on the road for the first few years in the industry. Now, I come home for a couple of weeks and I go out for three or four weeks.

ST: What regions do you run and why?
William: I live in New England, but as soon as I come out of the house, I usually get into the Southeast and then we’ll run out into the Midwest. I’ll do pretty much all of the Midwest, since I like it out there. Very seldom do I go to the West Coast. Fuel prices seem to be running better out in the Midwest. And as far as the roads, you know, they’re a lot more open. New England is very tough because everything was built 40-50 years ago and nothing’s been upgraded.

ST: How did you go about deciding on the truck you now own?
William: When I was starting a trucking career, I either had a choice between a Peterbilt or a Freightliner, so I picked the Freightliner.

ST: What advice would you give to someone purchasing their first truck as an Owner Operator?
William: Keep it maintained—that’s how I have over a million miles on my truck, because I maintain it. I just spent $2,400 on this trip home. Not too long ago I did a brake job on the trailer as well. Every time I come home, I’ll put it in the shop and spend money on it, even though I don’t need it just to be legal, but I want to keep my truck in good shape.

ST: Are you planning to buy additional trucks and become a fleet owner in the near future?
William: No, but if you had asked me that question 10 years ago when I was starting a trucking career, I probably would’ve said yes. Now, I’m probably two years away from retiring. I think Safety called me a couple of weeks ago and asked me about that. I just don’t want to take on the responsibility of a couple more trucks at this time. I’ve got to worry about payroll, paying those drivers, worrying about how to make money in trucking as a fleet owner. They’ll be calling me at two o’clock in the morning, saying “I had a breakdown, I need a, you know, $5,000 to fix whatever is broken on the truck”, or “I had an accident”. So yes, I’ve thought about it and I do not want to do it, but if it would have been 10 years ago, I probably would have done it.

ST: What do you think are the most important things for an Owner Operator to consider when accepting the load?
William: I look mainly at where it’s going, what area. I think Status is a reputable trucking company, and dispatch is good. I always keep in communication with dispatch about what areas they want me to go to. You don’t want to get loads going into downtown Chicago or downtown Detroit. I also told Status when I got hired five years ago that my no-fly zone is New Jersey and New York. So basically, I could tell the new guys coming into the industry, starting out as new Owner Operators, just make sure you communicate and the dispatcher knows where you want to run and where you do not want to go.

ST: How do you handle breakdowns out on the road?
William: That’s why I maintain my truck well and keep it in good shape – I don’t want to have breakdowns on the road. And I can tell you I don’t have too many. One more very important thing – I always do a pre-trip in the morning. You have to make sure you do that, because something could have happened in the last 600 miles. Just a while ago, I was out in Big Springs, Nebraska headed out to Utah. I got out of the truck in the morning to do my walk around and noticed that I had a 12-inch galvanized spike in one of the trailer tires. It wasn’t losing air, but good thing I spotted it. I ended up going to the shop and getting it done.

ST: Any situations while being in the trucking industry that have made you wiser or better as an Owner Operator?
William: I would have to say, you have to think about your health and yourself. You know, when I first came out on the road, like I said, I was out here for 10 or 12 weeks. I would just run myself into the ground. And my health suffered for like five years, six years. But now I do things differently. So, my advice is that taking care of yourself while you’re out on the road is key. 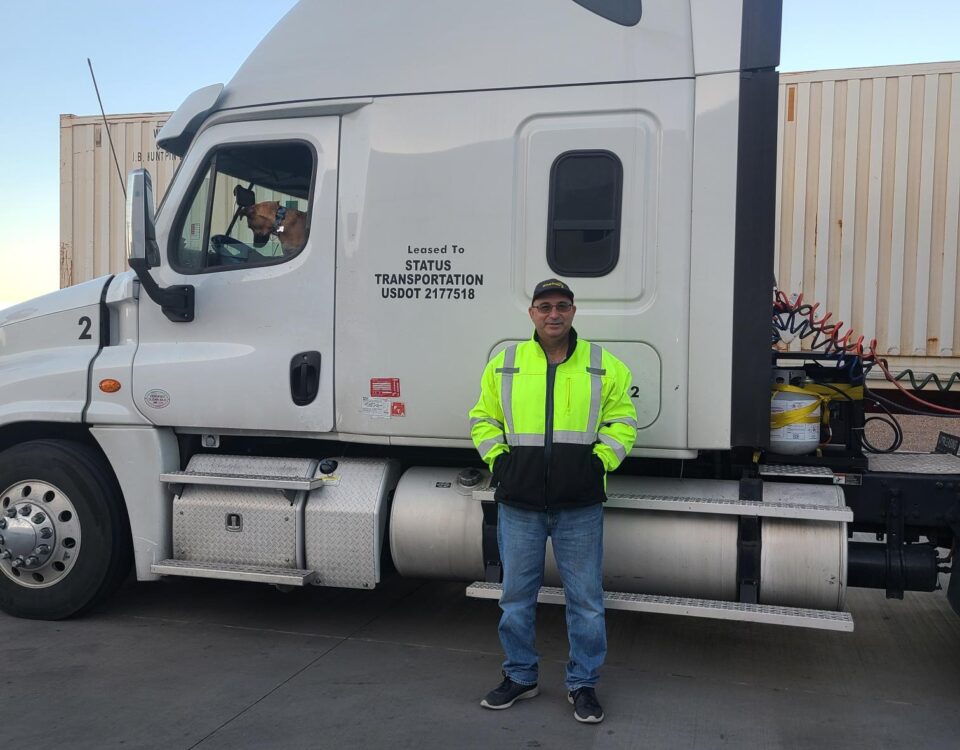 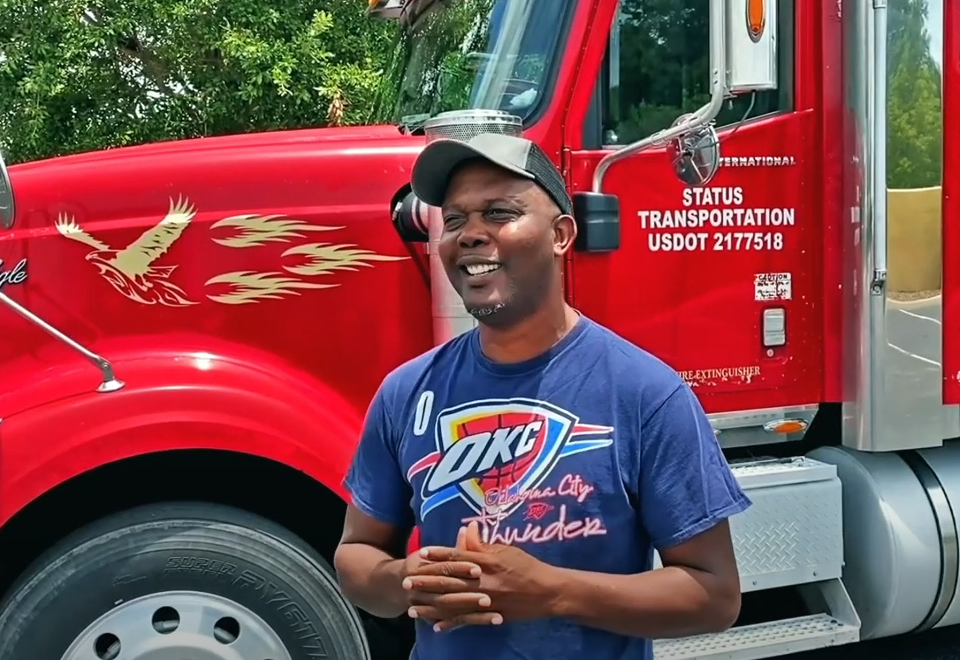 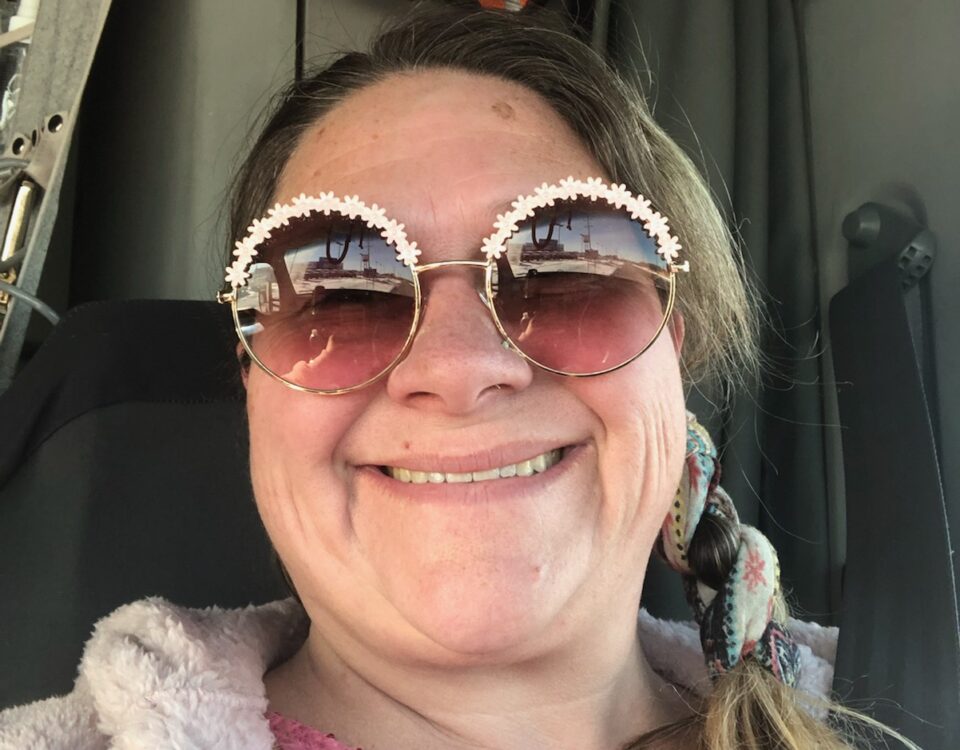